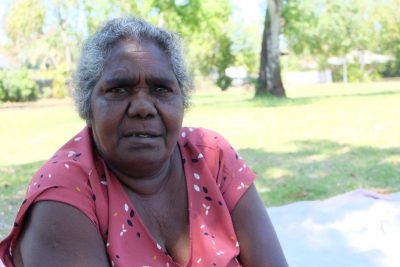 My name is Edna Gäwuḏu. I am 58 years old. I have 5 children, and 1 adopted daughter. I have also looked after children from my 4 sisters. I went to school in Galiwin’ku, at Shepherdson College. I left school in 1974, and moved to Gapuwiyak.

After I first moved to Gapuwiyak, I spent time raising my family, and looking after my mother and sisters.

The first job I held in Gapuwiyak, was working at the ALPA store. I worked at the store for 2.5 years.

When I left ALPA and I worked for the Strong Mothers, Strong Babies program for around 2 years, and helped young mothers to care for their children, taking to the clinic and supporting them to be happy and healthy.

After that I got a job with Ŋaduŋgay Homelands as a bookkeeper, supporting people in homelands working for CDEP. I used to do their pays, and other government business like the census, checking how many people live in homelands, and other things.

When Ŋaduŋgay got closed down and amalgamated into the Regional Council, all the staff came to work at the council. This is when I got elected as the Chairperson, and I served in this role for 3 years. I was the first Aboriginal woman to be elected to this position.

Then I undertook some training with Batchelor College, learning more about written and spoken English. I did these studies for 2 years, and then graduated with a Certificate III from this program.

It was after this, that I did some further training at Nungalinya College, and graduated with a Certificate III in Community Studies.

Then after all of this, I had some other work helping Balanda who would come to Gapuwiyak. I worked as a consultant assisting them with language and cultural awareness.

I am also involved in ceremonies, and other cultural business. I work with the NLC speaking on behalf of my mother clan and my own clan, helping to work through TO problems and responsibilities. The NLC know me as a senior woman who can speak for my family, and understand and work well with both Yolŋu and Balanda.

I work with, and respect, both Yolŋu and Balanda law. In doing this work I am a role model for my children and grandchildren, supporting the generation to come.