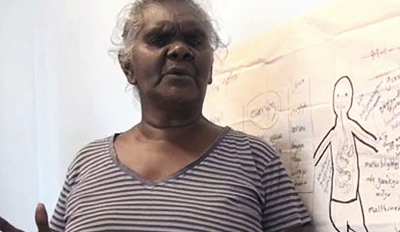 My name is Rosemary Gundjarraŋbuy.

I am an elderly woman from Galiwin’ku who is a respected person in the Garrawurra clan, as well as in the community.

I worked for 25 years as a teacher at Shepherdson college when it was a bilingual school. We had a two-ways approach to education taught in the school. I trained for this work by attending Batchelor College where I completed a Certificates 1, 2 and 3 as well as an Associate Diploma in teaching. I was going to complete my post-graduate degree, but I had to withdraw halfway due to illness.

After many years at the school, I resigned so that I could begin to work in the community. Initially, I was working for aged care with my daughter Anita Goluŋ. Working for the benefit of the elderly people was my first job in the community.

But this was a very stressful time in the community for petrol sniffing, so I applied for another job as a youth worker.  I had to spend a lot of time talking and caring for the young people, inviting them to my home and teaching them that they had someone who cared for them and had love for them.

Sometimes me and my husband would take them away to my husband’s homeland where they could feel like they had parents looking after them. With our own money we provided them with food and looked after them. Those children that we took away to my husband’s homeland were the ringleaders who were teaching the others about sniffing. We taught them how to live well in the community, rather than spreading bad behaviour.

We would treat them the same as we taught our own children, and when they saw our children they wanted to change from doing bad things to travel on a good path. We gave them love and care, and they learnt a lot of things from us. We employed them as CDEP workers on the homeland so they could earn their own money, we supported them to be good role models in my husband’s community.

Instead of considering them to always be bad people, we helped them and supported them to change as they took on different kinds of work that they were good at. They became proud of the work they were doing. 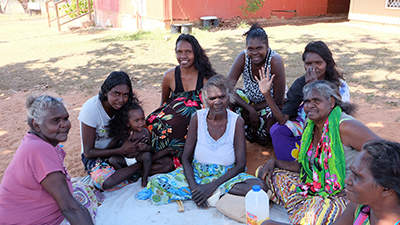 After that I worked for Miwatj Heath as a community worker at Galiwin’ku, at the same time that I was doing a Community Development course through the university. This is when the FAST program was first began in Galiwin’ku, and I became the first Coordinator of that program. This is where I learned how to be a Coordinator.

Later, through Menzies School of Health  and Anne Lowell, a Health promotion program focusing on chronic health was introduced to Galiwin’ku. Both my previous work with the petrol sniffers and as a coordinator helped me to step into a coordinator role on the Sharing the Full and True Stories about Chronic Conditions project.

Through this work I came to apply for a coordinator’s position at Yalu’ Marŋgithinyaraw. I was working by side with the Yalu’ Marŋgithinyaraw manager, Joanne Garŋgulkpuy. Later, when the role of Yalu’ manager became free, the board decided to put me in there. I was in that role for nearly 10 years.

“From Cyclones to COVID-19: Disaster Management from a Yolŋu perspective”