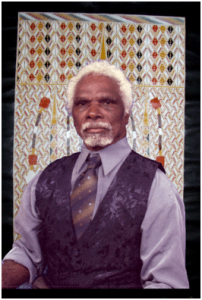 He has worked for the Aboriginal interpreter service for 10 years, interpreting in a medical and legal capacity and recruiting, training and mentoring new interpreters. He has worked in both Katherine and Darwin courts helping those in trouble with the law to understand their situation, and look after their family and affairs. He has also delivered presentations on domestic and family violence and Aboriginal customary law through the NT Law Society, Charles Darwin University and the Departments of Prime Minister and Cabinet and Children’s Services, as well as with NT training groups and Correctional Services. He has travelled to Alice Springs for the Indigenous world conference, Brisbane University and to East Timor presenting on Aboriginal customary law.

He is skilled in both Balanda and Yolngu law (Gunapipi and Ngarra Law) and has worked to make sure people correctly observe the rules of both systems, and do not use ceremony grounds as a way to escape or avoid their problems in the Balanda courts. This helps to people to be aware of their responsibilities to both systems of law, to keep both systems strong so they may work together in issues of public concern.

He has worked with the Larrakia Nation Aboriginal Corporation on research as well as with the Northern Institute and School of Law at Charles Darwin University delivering lectures on Aboriginal customary law. He has also worked with Dr Daniel Kelly to train new recruits for the NT Police, teaching them to work in culturally appropriate ways in remote communities. He has also appeared on television for crime stoppers, helping to keep people in the community safe. He has worked in the Department of Justice, Community Policy and Safety, travelling to remote communities speaking with people about the use of mobile phones and cyber safety.  He visits homeless people in the Long Grass and talks to them about limiting their drinking habits and how to live a better life; letting them know that drinking everyday is not the way to look after them.

Mr Gaykamangu is the author of two books: Ngarra Law: Aboriginal Customary Law from Arnhem Land (2012) which is about Aboriginal customary law, and Striving to Bridge the Chasm: My Cultural Learning Journey (2013) which tells the story of his learning journey from a young boy in Milingimbi with inherited traditional leadership, to a Senior Elder supporting his people through mainstream legal systems. However, at the end of the day Mr Gaykamangu also likes to sit and work on his artwork, traditional paintings on canvas which people see and ask him to paint. Through all this work, his vision is to help white people and black people work together in the Northern Territory so together to develop our country as a nation.

Mr. James Gaykamangu, a well-respected employee of the Department of the Attorney-General and Justice, is the proud recipient of the 2013 Top End NAIDOC Elder Award, which was handed down in an awards ceremony in Darwin in July 2013.

James’ claim to the award centres on his proven ability and commitment as an inspirational leader and role model to the younger generations.  As a senior custodian of Ngarra (traditional) law and a respected elder, James plays an important role in teaching young people about Aboriginal culture and traditional ways.

Ngarra law underpins the social order of the Yolngu people; it is passed on from generation to generation and is an essential element in the initiation ceremony for young boys.  James uses a ‘two-way’ approach to teach young people about right from wrong.  He teaches young people about Balanda (white man’s) law through traditional stories, paintings, song lines and dance ceremonies.  Through this ‘two way’ approach James also teaches non-Aboriginal Australians about traditional Aboriginal customary law.

In addition to his role as a respected elder, James is an accredited interpreter.  He assists Aboriginal people though the Court system including Court procedures, bail conditions and Court testimonies.  He also works extensively as an interpreter for Aboriginal people including helping people to understand medical issues as well as conveying important public messages to Aboriginal communities.  James Gaykamangu is a senior Aboriginal elder in terms of age, status and respect.

He works tirelessly for his people bringing law and order to communities and guiding the younger generations. James is also an extremely talented artist, teacher and linguist. He uses his skills for the betterment of his people and is a highly valued member of the Northern Territory Public Service.  The AGD commends James Gaykamangu on this important recognition, and for his continuing hard work in the justice

ACADEMIC AND OTHER ACHIEVEMENTS 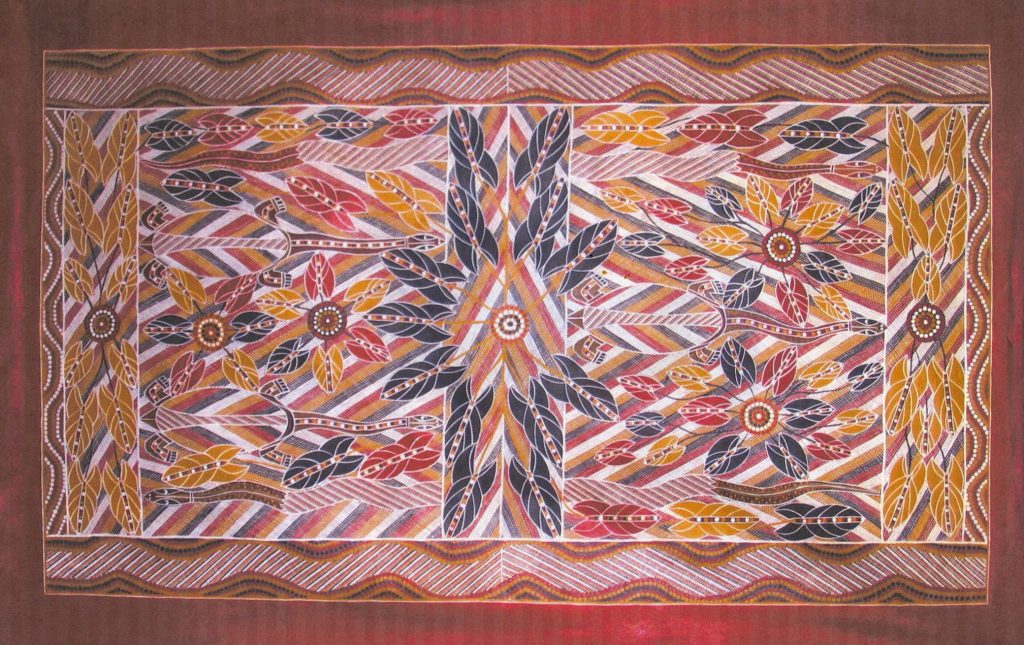 This painting depicts the story about the longneck turtles and rainbow snakes.  These four ceremonial stories belong to my grandmother’s ceremony, the Balmawuy/Ganalbingu clans.  The ceremonial longneck turtles are located between the Glyde and Woollen Rivers in Arnhemland, a place called Djerringgi.  The two rainbow snakes ceremony is located upstream at Woollen River itself.

The artist of this painting has the full rights to paint this specific ceremony because this is his mother’s mother ceremony.

The dots between the rainbow snakes and where the longneck turtles are laying are little twigs (djilinydjil).

The dots outside or beside the rainbow snakes are the sand bank and he long grass (burrululu).

The leaves within the circle shapes are the waterlily leaves, the home of the longneck turtles and rainbow snakes.